Dare To Be Different

PETRA is the Cover Story of “Dare To Be Different”! Swiss Insurance “Nationale Suisse” ‘s Annual Report Book. In 2011… daring to be different! Her proceeds of SFr. 3000.00 ? were donated to UNICEF. LOVE THIS! ? 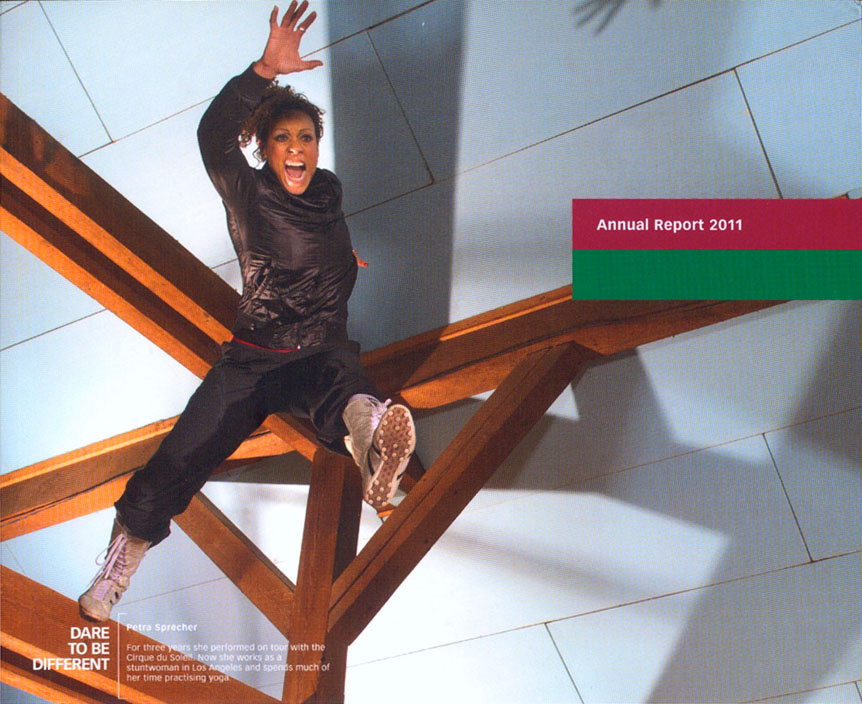 For three years she performed on tour with Cirque du Soleil. Now she works as a stuntwoman in Los Angeles and spends much of her time practising yoga.

Petra Sprecher never ponders existential questions before performing a stunt. She only starts searching for answers if the telephone stops ringing for weeks on end — or even months, as was the case last year. Nothing happened until she received a call in November from the stunt coordinator for Flight, a film starring Denzel Washington in the leading role. “Sometimes you find out at two o’clock in the Morning that you have a job the next day. Then you just have to drop everything,” says the Basel-born stunt artist with traces of an American accent. Hollywood is still feeling the effects of the economic crisis.

Petra Sprecher’s career initially took off like a rocket. The Youth Circus Basilisk served as a springboard to her success. She was six years old when she stood in the spotlight for the first time. This was her world. While she was at drama school in Zürich, however, she realized that this would just be one step on her career path. She enrolled at the L’Écôle Nationale de Cirque (National Circus School) in Montréal and was still completing her basic training when she was spotted by a talent scout from the Cirque du Soleil. She toured North America with the circus troupe for three years, performing a high-flying cloud swing act in their Quidam programme. Everything she owned was piled into her 1983 Ford Thunderbird. One day she saw a picture on the front page of a newspaper under the headline “African American Stunt Women in Hollywood.” Without even reading the article about these fearless women, she immediately knew: “That’s it!” After years of constantly being on the road, she set up home in Los Angeles. She had finally found her place.

The excitement on set held a magical attraction for this Swiss circus performer, whose biological father is from Nigeria. “Sometimes you have to wait for 12 hours to do your stunt. Then once the camera is focused on you, you have to produce your Best performance within just a few seconds.” Yet Petra Sprecher’s training paid off: in 2009 she received two nominations by the Taurus World Stunt Awards. Neither jumping through a window, as she did in Steven Spielberg’s Minority Report, nor performing a “three-sixty” in a car causes her any sleepless nights. “You picture the scene, feel the adrenaline and your body does what it is told.” The 38-year-old finds teaching yoga far more daunting. That requires mental strength and forces her to be calm.

The slump in the film industry also has its benefits, says Petra Sprecher. It has opened up a new opportunity for her, one which she would never have considered otherwise. “I used to live my life superficially — with my jobs, my clothes, people. In the past few years, I have learned to focus my attention inwards.” She visits the temple in the residential district where she lives almost every day. She goes there to distance herself from the hustle and bustle of the city, and to meet the people who act a little as her surrogate family while her own is so far away. However, she has by no means abandoned her dream of making her big breakthrough as a stuntwoman. “My little house is at the foot of the Hollywood Hill. But one day (well, ideally right now!), I would love to be on top. …but then I wouldn’t be right next to the temple. So, I am where I’m supposed to be!”